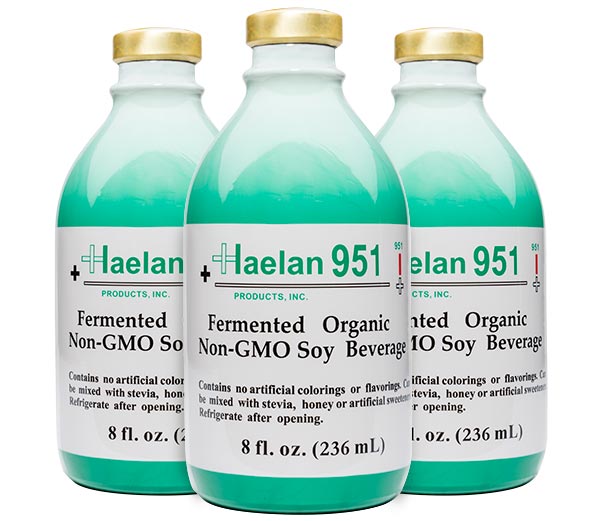 Haelan is a fermented soybean beverage that is manufactured from whole, non-genetically modified soybeans. The production process involves a proprietary microbial fermentation process that breaks down the beneficial soybean nutrients into bio-available compounds that are able to be assimilated into the blood and tissues resulting in health benefits at a cellular level. These benefits include DNA repair mechanisms. The DNA repair process is not achieved by the naturally occurring large clusters of proteins and phytochemicals. Haelan’s development has been refined with over 20 years of experience by eminent scientists who feel they have achieved a food product that offers multiple and diverse beneficial biological effects and superior health benefits.

Who is eligible to take Haelan? What types of people consume Haelan 951? Who should not take the product?

Haelan fermented soy beverages are classified as “food” by the United States Food and Drug Administration. It has been used by both healthy and sick children and adults. People who are allergic to soy should take Haelan with precaution. Although, Haelan’s characteristics are “anti-allergy”, people who have prior allergies to soy should take precautions with Haelan’s products. Most people are allergic to compounds and impurities that are found in unfermented soy products. Haelan’s processing removes most of the sugars, carbohydrates, and impurities that cause allergies in people. Allergies to Haelan, when found, are generally skin itching or skin irritation that is usually found to be detoxification.

One reported case of skin detoxification after consuming Haelan involved a husband and wife who were sick for more than three years. After both the husband and wife consumed Haelan’s fermented soy beverages they experienced liquids being excreted from their lips and from the top of their heads. When the liquids were examined they were found to be pesticides. It was then determined that the pesticides had been the source of their health problems. They worked in a plant nursery where pesticides were used routinely. Their “allergic reaction” was skin detoxification resulting from the body’s efforts to heal from within by expelling the contaminants.

POSSIBLE CONTRA-INDICATIONS FOR CONSUMING HAELAN 951:
I. PREGNANCY: Can pregnant women use Haelan 951?

Regina Chorsky, M.D., Forensic Pathologist, has experience with a pregnant patient diagnosed with breast cancer. The patient had a lumpectomy and used Haelan in lieu of chemotherapy in order to protect the fetus, which would have been killed by chemotherapy treatments. The patient became cancer free and a healthy baby girl was born.

In addition to the preceding technical discussions, it was brought out that there have not been any problems experienced in China or Japan with women consuming high levels of soy phytoestrogens during pregnancy. At the time of this scientific presentation, it was not established what the upper level of soy isoflavones was before toxicity to the liver or kidneys developed. It was thought that 1,000 mg of soy isoflavones might be toxic to the liver and kidneys. However, a later scientific study showed there was no toxicity with levels of genistein at 2,000 mg per kilogram of weight in a toxicity study with rats. This study ended the critical question on what was a “high dose” of soy isoflavones and how much could be consumed without damage to the liver or kidneys.

If a woman is pregnant and having twins, triplets, etc. which can result in both male and female babies being born — it is best to delay consumption of Haelan 951 until after six months has elapsed to make sure the genitals of the fetus are developed prior to consumption of any foods or supplements containing phytoestrogens.

2. BREAST FEEDING: If women do breast feeding, can they use Haelan 951?

Yes, women who are breast feeding infants can use Haelan 951. Millions of infants have been fed soy based infant formulas in the United States for more than forty years and in spite of discussions on this matter there have been no positive indications linking soy formulas to problems in infants. Again, Japanese and Chinese women consume high levels of soy phytoestrogens while breast feeding infants without any reported problems. Certainly infant soy formulas would pose a much greater risk, if any, to an infant’s health than a woman consuming Haelan 951 and breastfeeding the child.

3. CHILDREN: Can children use Haelan? If so, what is the minimum age?

Yes, children can consume Haelan 951. Dr. Jane Lu, in a study at the University of Texas Medical School, Galveston, Texas showed that healthy women who consumed the “whole soy” (like Haelan), not genistein or other isolated soy phytoestrogens, the total circulating estrogens were reduced 30-40%. Japanese studies show 25% reduction in total circulating estrogens in the healthy Japanese women. In a study with 303 healthy people taking Haelan, it was shown that the Haelan balances testosterone and estrogen levels in men and women.

There was a study performed with Children 6 months old to age 11 using Haelan as hospital nutrition. The results of this study showed that the Haelan consumption group had more muscle mass and less fat than the control group not using the Haelan. A copy of this study is available on this website.

4. SIDE EFFECTS: What possible side effects are known by taking Haelan?

There are no adverse side effects experienced by healthy or in non-transplanted recipient sick people. Liver detoxification in the form of diarrhea is often reported immediately after first consumption of Haelan but these symptoms disappear as the liver is cleaned up. Worms, bugs and parasites are often excreted with fecal matter in the patient having these conditions.

Transplant Recipients:
Because Haelan’s fermented soy beverages increase immune function, a person who has had a liver, kidney, or other organ transplant may have problems with consumption of Haelan. Organ transplant recipients are normally on immune suppression drugs for several years following their organ transplant procedure to block rejection of the transplanted organ by the person’s immune system. A person having received an organ transplant and not receiving immune depressing drugs may consume Haelan but caution should be taken to make sure there is no adverse immune response to the donated organ.

5.OTHER CONTRA-INDICATIONS: If there are counter-indications, which are they?

All known contra-indication involved with the consumption of Haelan’s fermented soy beverages are listed above.

WHAT ARE THE RESULTS FROM TAKING HAELAN 951?
The benefits from taking Haelan 951 are many. There are studies on liver, liver function, liver support, reducing carcinogens in the liver, lung, emphysema, silicosis, asbestosis, an anti-aging study with 303 healthy people, a study with 318 cancer patients taking Haelan in combination with chemotherapy and/or radiation, leucopenia (low white blood cells induced by chemotherapy), various cancer cell line studies. In addition, there are other studies, including but not limited to a study with Haelan used with infants and children as hospital nutrition.

A brief summary of people who have benefited from the consumption of Haelan’s fermented soy beverages follows.

EXAMPLES OF PEOPLE THAT HAELAN HAS BENEFITED:

The characteristics of Haelan’s fermented soy beverages derived from the whole soybeans are defined as being:

People With Cancer, Immune, Auto-immune, and Assimilatory Problems:
The largest group of people benefiting from the use of Haelan’s fermented soy beverages are cancer patients. Studies show that 40-80% of advanced cancer patients die from cachexia, which is commonly referred to as “protein-calorie malnutrition”.

An article was printed in the Townsend Letter for Doctors and Patients in the November, 2004 issue titled “Soy and Cancer Survivors: Dietary Supplementation with Fermented Soy Nutraceutical, Haelan 951 in Patients Who Survived Terminal Cancers” by Vijaya Nair, MD, FAMS, MS. The cases presented in this article were submitted as part of the National Cancer Institute’s Best Case Series Program. The Best Case Series focuses on documented case reports of patients diagnosed with cancers who have shown significant improvements in their clinical conditions using complementary ad alternative supplements as mainstay treatment. The complete article is available on this website.

CREDENTIALS OF THOSE PERFORMING RESEARCH ON HAELAN:
Haelan’s fermented soy beverages have evolved with over 20 years of research investigating the health benefits of these fermented soy beverages. Initially this work involved input from nutritionists, fermentation experts, microbiologists, oncologists, University Professors and thousands of patients in Chinese hospitals being treated for various conditions. Over the years the work expanded to include input from doctors, nutritionists, oncologists, pathologists, scientists, and researchers working at Hospitals, Clinics, Universities and Medical Schools, in the United States and Europe.

Research undertaken and funded by the National Cancer Institute, the National Institute of Health, Haelan Products, Inc., Haelan Research Foundation, and other Public Foundations has greatly increased the understanding of the complex soy matrix and the potential health benefits that can be derived by the mechanisms of action and metabolic pathways improved by these soy compounds.

There are more than 9,000 studies performed since 1991 on the whole soybean or components within soybeans. Much has been learned from these studies. Studies are being conducted to use this knowledge to lengthen the lifespan and improve the quality of life of the cancer patients. In addition, one of the goals of Haelan Research Foundation is to produce healthier people through better dietary regimens. The results will be fewer illnesses, reduced surgical and medical procedures and less dependence on drugs and their adverse side effects. Foods are medicines and may be the best medicine for a large section of the population.

Disclaimer: Any information contained herein is given for educational purposes and not for the purpose of medical advice to be used in the prevention, treatment or diagnosis of a disease.

I am your personal advocate and consultant in cancer and general health.

We have a team to support you.

My objectives are to empower you, wherever you are in the healing journey. We are a team. My colleagues and I will help you on your chosen path back to health. I am here to help you to Live Your Life! as a person successfully dealing with a cancer episode, not as a cancer patient trying to squeeze in “living a life”.

Is your body in "healing" mode?

The body is a self-healing mechanism and works best when given the right tools.

The body knows how to heal when the “interferences” are removed and the tools are provided. Our mission is to address the multiple “interferences” specific to your life that contribute to dis-ease and cancer. You will be empowered to take effective action, targeted to your situation. You will have more knowledge with which to evaluate options and make better decisions for your current cancer episodes and to protect yourself for the future.